The news of my death has been greatly...

Played a fun show with Ramblin’ Rose on Sunday night, they were awesome and are going in the right direction. It was fun to sing with Sue, and hear her play the saw. Next for me is a summer vacation, and then I’ll be back in August to try to assess the situation. The apparent demise of International Turpentine means I won’t have access to Yawn or Marcus anymore, so I’ll have to figure out what to do next. But even if I’m not playing shows anymore, you can bet I’ll be chipping away at my various projects in the studio, and putting stuff out there on the web. I ain’t dead yet!

Saw a show/played a show

Friday, May 1, my buddy Ezra and I saw Laura Repo @ The Local. Great show! Two sets, lots of fun, met some nice people. Her band was great, although the bass player had some cable problems early on. I had an absolute blast that night. So glad I went. 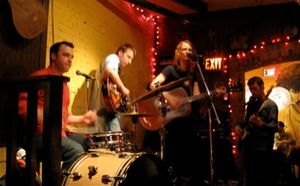 Then Saturday, Yawn and I hosted Penultimate Saturday @ the Renaissance Cafe, featuring Ramblin’ Rose, Kyp Harness, The Marquis De Amberfish, and Ruth Jenkins. Yawn and I each played a brief set, and Soo Joyce accompanied me with backing vocals and (lucky me) played the saw!!! Yes! We said one last goodbye to the Renaissance, and Randy and Keelan cracked open the bubbly! Thanks guys. 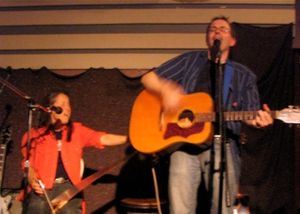 Tonight marks the end of a great relationship between Randy aka the Renaissance Cafe and International Turpentine. It’s been a good run, from Yawn and I playing open mics in early 2008 to the Dented Bentley shows later last year and finally the four Flammable Fridays in early 2009. We will miss the Renaissance!! Tonight Edo Peled and TC Folkpunk (Tim Cameron) will help us out, but our set to close out the night will definitely be bittersweet. Hope to catch you there. 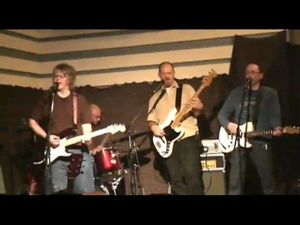 We have a bass player! Dented Bentley is: Yawn Temiseva (guitar, vocals), Bo Green (guitar, vocals), Vaughn Passmore (aka Red Robertson, bass) and Ian Esquivel (aka Flynch Dakota, drums). We had our first full kit rehearsal the other night, and Friday we rocked the Renaissance Cafe. Thanks to everyone who came out and supported the lineup of The Rensons, Adi, Marquis de Amberfish, and Dented Bentley! And thanks to Randy and Ryan for their usual Renaissance charm. We had a great time.

The week that was

I got to do two fun things last week: number one was going to Vancouver and watching a Wichita Trip rehearsal (I even played a couple of tunes with the band, it was way cool). They were hot! I mixed a couple of tracks for these guys last year, but having never met them, it was great to finally see them in action. I'm hoping I can work out a gig with them sometime when I'm in lotus land, it would be fun to open for them.
Number two was a gig at Graffiti's. Tanya Philipovich opened the night, and was amazing. Great voice, great playing, great songwriting. What else can you say? I did a set with Ian on percussion, Yawn did the same, then Soo Joyce and her pal Greg did three songs -- that was a treat too. They had two guys from the audience sub in on drums, which was cool. Then finally Ian (drums), Adam (bass), Yawn and I did a band set for the first time together. It was a fun-filled and action-packed night. Thanks to everyone who participated and everyone who came out!

In the second installment of our series of shows, Yawn Temiseva and I are appearing at Graffiti's Bar and Grill (170 Baldwin St.) on Saturday, April 26th at 9:00 pm. This time we are adding an electric set to our acoustic sets, so we can rock out a bit. Gifted songwriter and old friend Tanya Philipovich will be joining us on the bill, and we are hoping Soo Joyce will make an appearance too, so it should be a full and entertaining evening. See you there! 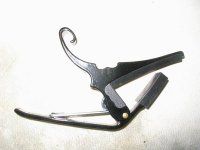 Not My Dog Show

Not My Dog -- a really nice little venue in Parkdale with an awesome vibe. Daniel, one of the managers there, gave us a helluva warm welcome. Ben Sures stopped by while we were eating dinner, and must have been shocked that he sold about 6 cds as soon as he walked in. What happened was that Daniel had played the cd just before he showed up, and we were all impressed and had our wallets ready. Anyway, definitely a nice vibe.
As for the show, Kyp Harness was great, he played some new tunes for us all and they were amazing. Hopefully we'll be joining him again at another show. Yawn was kicking as usual, I knew when I heard the guitar intro to River Of Water we were in for a fun night, and I tried to keep up as best I could. Yawn and I traded short sets back and forth, a format we are toying with for now. I think it worked. People had fun, we were very loose... couldn't have asked for a better opening show on the comeback trail. Thanks to Kyp, and all of the folks who came out to see us!

Yawn Temiseva and I are teaming up for a show at Not My Dog (1510 Queen St. W.) on Saturday, February 9th. We are madly working on material, using the open mic at the Renaissance Cafe (Woodbine/Danforth) as a practice range, and are rehearsing some songs together to make it even more fun. Ian Esquivel has agreed to provide percussion, so it's shaping up to be an interesting night. Of course, Not My Dog has a 20 person capacity, but hey, you can't have everything. Yawn and I are hoping that this is the first of many gigs together. That would be great!

Update: great news -- it looks like Kyp Harness will be joining the lineup at Not My Dog! It's going to be crowded in there I think.

That's how busy my fall was. October 5th at the Savannah Room -- the Green Party -- was three months ago, and I'm just writing about it now. Anyway, it was a night to remember for the musicians involved, and for Ellie and I, who scrambled to put it all together. I got to play with guys I haven't played with in decades (no guff!), in front of friends from every part of our lives. Dan played with every musician who hit the stage.

Rich Challenger started things off with 2 a cappella numbers, and finished with Dan and Ian Esquivel on bass and drums for a rousing rendition of Bill Withers' "Usin' Me".

I played a mix of Green Achers tunes and various other stuff, all backed by Dan, Ian, Andy Bentley (guitar) and Frank Barth (dobro & mandolin). It was just like riding a bike, we rocked out as hard as we could, and finished with Sunday Drivin'. Encore? You must be joking. No, not joking, and we played Cigarette Smoke. Wow. Somebody (Andy) was so excited they wrote "Jiks" on the bathroom wall. 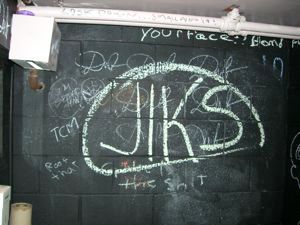 Next up was Yawn Temiseva playing solo, and he was great, playing "Fuque The Government" and some delicious tunes from his latest album. Then he got up again with Paul Shikata, Marcus Temiseva, and Adam Khedheri and they did two Baggage Handlers songs: "Crane Shot" and "Intrusive Bag". First time ever the BHs have played live I think. Historic.

Finally it was Lung Slug, playing all of the tunes I love so much. Dave McKellar and I were calling for "Bulk Eraser", even after they played it. I decided I will always remember the evening as Lungstock, and I thank all of the friends and musicians, and the folks at the Savannah. It's a night we won't soon forget. (Aside: and in one of many amazing subplots, Marcus got to play "Stupid Guy" live with his brother -- a song he first heard when he was just a kid and Yawn was writing for Lung Slug.)